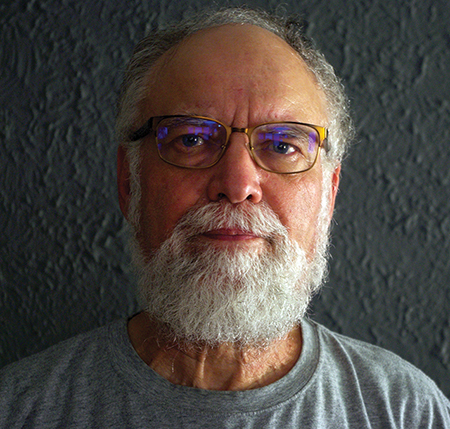 Bob Gehrke, a full-time artist working in painting, sculpture and crafts, received a BFA from the University of Wisconsin-Eau Claire and MFA from the University of Cincinnati. He operated his own brass and bronze foundry for many years, and continued working in other mediums. His public and private art commissions include Symmetry, an interactive wall relief sculpture at the Minnesota State Academy for the Blind in Faribault, Minnesota, and Flight Column, a large-scale outdoor sculpture at the University of Montana, Missoula. Born in Eau Claire in 1950, he died at his home in Cornell, Wisconsin, in February 2019. His own statement about his life and work follows.    >>    OBITUARY

I was born in Wisconsin and have lived here most of my life. Most days I walk three dogs three times a day along a nearby river trail or through the neighborhood. I attended the University of Wisconsin-Eau Claire (BFA 1973) and the University of Cincinnati (MFA 1975).

I operated my own bronze casting foundry for over 40 years, making sculpture and craft items. I have created several large-scale sculptures in both public and private settings. Materials include weathering steel, stainless steel, bronze and glass. Public art projects include Flight Column, a 24' high sculpture of weathering steel at the University of Montana in Missoula, and Symmetry, a cast bronze and aluminum wall sculpture at the Minnesota State Academy for the Blind in Faribault.

Inspiration for my art usually begins with a vague idea. A walk, a story, a found object or a piece of wood may engage my imagination. The Midwestern landscape most often informs the structural essence of my work. River stones, bones, stars, leaves, birds, butterflies, postcards and historic photos all hold mystery. Influences on my artistic development include the symbolists, Rene Magritte, Odilon Redon and Max Klinger. I was very impressed by a show of Miro bronzes I saw when I was just beginning my career.

Recurring themes in my work are near and far, fragile and enduring, calm and chaos, infinite progression and the detritus of nature. I try to create an open-ended visual narrative that is layered, accessible and personal. I am attracted to images that are often overlooked, forgotten, cloistered away. They seem to represent the mysterious and unconscious forces that often guide our lives.

In recent years I have concentrated more on oil painting. I like the challenge of creating images that move the eye and engage the imagination. I often play off the dynamic of picture plane and picture space with images that exist on a flat surface such as text or postmark being contrasted with more realistic three-dimensional images. This is a concept that also emerges in my sculpture. Cutting images of birds in flight out of a flat piece of steel creates a reassertion of the two dimensional against a deep space background of trees and sky.

As a woodturner I have a longtime obsession with the twist spin top, one of the world's oldest toys. I turn them on a lathe from a blank or wood or cast resin. Each is a one-of-a-kind creation with its own personality. Tips are sometimes metal or durable plastic to help keep the top running true. Most are balanced to run for over a minute and some will run over two minutes with a good spin on a smooth surface.